WHEN WILL THEY EVER LEARN?

Posted on February 26, 2011 by truthsbyruth
This year marks the 150th anniversary of the Civil War.

Webster defines civil as:  “of a community of citizens, their government, or their interrelations as: civil affairs/ polite; civilized; refraining from rudeness.”  How ironic that one of the most violent wars in the history of the United States used a word whose synonym means the exact opposite.
The first thing that pops into people’s minds when they discuss the Civil War is slavery.  Again, how ironic.  No incident related to slavery caused the outbreak of fighting.  Nor did the secession of Southern states from the Union.  In fact, Jefferson Davis (the Confederate President) vowed, “We propose no invasion of the North, no attack on them, and only ask to left alone.”
What went wrong?

In my novel, Soldiers from the Mist, Charlie’s mother, Clara said, “Slavery is a handy excuse to rile up young men’s emotions; a way to justify the killing.” The troubled Confederate Lieutenant in the story, Peter Montgomery, Jr., said “the excuses for war are many but can be boiled down to only four:  hate, fear, jealously, and greed.”  In a violent argument with his father, Peter called the southern gentlemen clamoring for war, foolish. That the “North was a sleeping dog that didn’t care about the South and its one-horse economy and backwoods politics.  But that wasn’t good enough for the South and they continued to poke the dog with sticks of greed and power until the beast woke and turned into a rabid, spitting animal ready to devour every good thing the South stands for.”
Unfortunately, even today, 150 years later, the Civil War conjures up strong emotions in the South.  The saying, “The South will rise again,” is often heard at rallies and protests.  The Confederate flag evolved into a symbol of hatred and bigotry.

My friends, who lived in California, have little knowledge of the war and don’t understand what the ruckus is all about.  Who were the Yankees?  Where the Rebels the ones dressed in gray?  What is the Mason/Dixon line anyway?
I am proud to be from the south and call myself a rebel even though I did marry a blue-nosed Boston Yankee.  And, yes, I do have the Stars and Bars in my house, however I don’t display it in public. I enjoy the freindly rivalry between the Yankees and the Rebels. 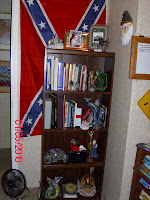 BUT:
I am not a racist.  I don’t hate the North.
I am first, foremost and always, an American.
In doing research for my book, I found it interesting that we still struggle today with the same issues as 150 years ago: alcoholism, mental/verbal/physical abuse, dysfunctional families, women’s rights, depression, and man’s inhumanity to man.  It begs the question, “have we really evolved?”
Mothers still stand in the streets and watch their babies march off to war.  The young men and women continue to go in order to prove themselves not realizing until too late that violence never solved anything.
My character, Specks, asked the million dollar question, “Wonder what would happen if everyone refused to fight?”  Charlie had the million dollar answer:  peace.
Peter Montgomery used the myth of the Phoenix to justify the War Between the States.  It was his hope that out of all the death and destruction, a better world would emerge.  On this, the 150th anniversary of one of the most destructive wars ever fought, we should pause and ask ourselves, “Is the world a better place?”
Peter, Paul, and Mary’s song, Where have all the flowers Gone? sums it up with five short words:
“When will they ever learn?”

This entry was posted in Civil War, Peter Montomery, Rebel, Soldiers from the Mist, Yankee. Bookmark the permalink.

4 Responses to WHEN WILL THEY EVER LEARN?