Posted on June 10, 2012 by truthsbyruth
Lions, Tigers, Fooey and Daisy Camo﻿
Yeah, yeah, I know.  I haven’t blogged in ages.  So sue me. I offer no excuses.  Life is what it is and ya have to do whatcha’ gotta’ do even if some things get put on the back burner—like blogging.
Last December you may recall I blogged about going to see the Christmas lights and Petco with my four-year old great nephew, Logan.  Last week-end Logan and I went on another adventure to the Tulsa Zoo.  We let PaPa and mom come with us too.
I sat in the back alongside Logan in his car seat.  PaPa and mom sat in front.  PaPa had to drive, but mom gets car sick, so she gets to ride shotgun.  Logan provided the entertainment signing at the very tip-top of his lungs to the songs on his IPod.  Oh, yes, even though the kid is only four, he has an IPod and what’s even more astonishing, he knows how to work the damn thing.  I don’t even know how to turn my cell phone to mute.
Between the 50th or maybe the 55th time of asking, “are we there yet?” Logan told me the first thing he wanted to do at the zoo was ride the Camo.  Hmm . . .  a Camo?
“Logan,” I asked.  “What is a Camo?”
“You know,” he answered in that little kid tone of voice used when adults are just so annoying.  “It’s that thing that doesn’t spit on you.”
“Oh, you mean a Camel.”  (I didn’t tell him those things spit like cornered cats.)
Ten minutes through the zoo gate and Logan spied the Camos.  Of course, I loved the idea of Logan riding a camel.  PaPa never has.  Aunt Ruth never has.  But Logan did.  Five dollars to ride a smelly, hairy animal named Daisy around a small circle one time did seem like a lot to pay, but I forked the money over anyway because, gee, riding a Camo is a once-in-a-life time experience. 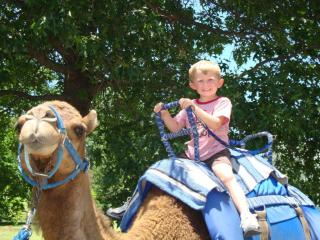 After the Camo ride, it was off to the reptiles.  Oh yippee!  The boa, the diamond-back rattler, and I guess a rat-snake all had the same names according to Logan—Fooey.  Why Logan calls all snakes by this name is a child-mystery, but I love it.

We ate ice-cream, talked to the parrots, and rode the train.  Logan loves trains.  So does PaPa.  The day grew hot, but the Tulsa Zoo has plenty of shade and it wasn’t unbearable, however, my feet were killing me!  I wanted to crawl inside Logan’s stroller and have PaPa push me around, but my butt is too fat and PaPa would’ve gotten a hernia, so I sucked it up and kept on truckin’.  Logan, on the other hand, ran everywhere.  But, hey, that’s what kids do at the zoo.
When I got home, I crashed on the couch and didn’t get up until it was time to go to bed.  Before falling asleep, however, I thanked God for the day.  I thanked Him for PaPa, mom, and me being able to walk so we could take Logan to the zoo.  I thanked Him for love of family.  I thanked Him for a beautiful day full of memories that will last lifetime.
And I thanked Him for Fooey the Snake, and Daisy the Camo.

This entry was posted in Uncategorized. Bookmark the permalink.